At Indo Nippon IVF, our vision has always been to promote an approach to fertility treatment which offers the best chance of success and reduces the emotional, physical and financial burden associated with Assisted Reproductive Therapies.

It is a certain kind of joy and immense satisfaction knowing that in our journey as Reproductive Doctors and Scientists, we have helped hundreds of women and families in their fertility journey.

After over two decades of giving a chance to women in all circumstances, we have gained enough expertise in dealing with complex and difficult fertility problems and it is very satisfying to say that Team Indo Nippon IVF have even helped many women who had actually been turned away, from other IVF clinics. But, what is most fascinating as well as educative is that every patient had their own struggles, their own difficulties to overcome and their own journey dealing with infertility.

Hence, we have taken today’s blog to share with you one of the many infertility and IVF success stories, which showcase how our patients endured a struggling battle with hope, even during times of discouragement as part of their IVF journey. I share this success story knowing that many of you may empathize with the situation and know that there is a solution for every problem.

How Mrs. B benefited from Cryotec Vitrification Program : 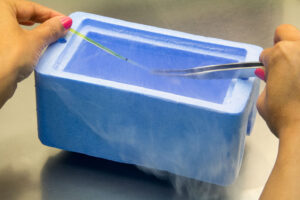 Mrs. B, aged 38 and her partner aged 40 had been married for 7 years before they came to us. Being ambitious, career-oriented and fiercely independent professionals, they had settled down for marriage after turning 30 and ensuring a decent financially secure living for themselves.

Mrs. B came with a family history of High Blood Pressure and also Ischemic Heart Disease, while her partner too had a similar family history of IHD along with Motor Neuron Disease. They had been trying to get pregnant naturally for almost 7 years when they approached us, as all their efforts were futile adding tremendous distress to their lives and their relationship.

After initial testing, we asked Mrs. B to undergo In-Vitro Fertilization (IVF), with a conventional flexible antagonist Stimulation Protocol where 10 oocytes or female egg were collected from her ovaries. We processed the eggs as follows: 10 MII, 10 fertilized 2PN, Day 5 – 5AA, and 1BB Blasts were formed which were then preserved cryogenically. We then proceeded to set up a transfer cycle to her and although, the couple was very apprehensive about the outcome, there was a successful conception.

However, the happy news was short-lived and Mrs. B underwent a Pre-Term Delivery at 6 months of Pregnancy. The baby did not survive. It was a very stressful ordeal for the couple that was already very anxious for it was the first time in their married life journey that they had been pregnant and losing a child, especially your first one can take its own toll. 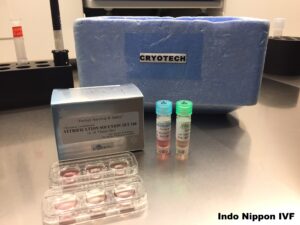 But the couple decided to give another try and we were also determined to ensure that they do achieve their objective of having a baby and enjoy the joy of parenthood. What followed was quite devastating. Mrs. B had a second successful conception, but that too like the first time, did not last the full term and she lost her baby in the 7th month.

At this juncture, I would like to give you a side-note that many times IVF cycles can be tricky and may not result in a successful pregnancy and childbirth. However, Mrs. B and her partner were not so easy to give up on their hope of having their child and emerged out of the despair with her two failed pregnancies. She underwent another Conventional IVF cycle and this time we cryogenically preserved 6 Blastocysts or Embryos. Upon some detailed discussion between the couple and our IVF team, it was decided to opt for a Surrogate to carry the pregnancy forward.

A Fresh Embryo transfer of a single good-grade Blastocyst was done in a Surrogate this time, which resulted in a positive pregnancy. Unfortunately in the anomaly scan, a congenital anomaly was noted and Fetal Blood Sampling was done which revealed low-grade and tissue-specific mosaicism. Even this pregnancy had to be clinically terminated. Not giving up on our efforts, we arranged a second Surrogate frozen Embryo Transfer of single Blastocyst, but unfortunately, this time she had a 9th week missed miscarriage.

However, we decided to get to the root cause of this issue and sent the products of conception from the 2nd Surrogate Transfer for analysis which showed Chromosomal anomalies – Deletion on Chromosome X with mosaic loss on entire X chromosome. Karyotyping or Gene Testing of the couple revealed :
– Male partner having normal analysis and
– Female partner was diagnosed with peri-centric inversion of Chromosome 9 at p11q13 region and large satellite on chromosome 15.

We did a PGS by NGS on the 5-day, cryogenically-preserved embryos which revealed that out of the 4 embryos sent, only 1 was Normal. A successful Surrogate Transfer with this normal 1 embryo (that was PGS-screened) was done which further led to a positive pregnancy test and finally led to the arrival of a healthy Baby for Mrs. B and Partner !!

Although, this success story highlights the importance of Cellular Genetics & Next Generation Sequencing in contemporary ART. It also shows how a good Cryotech Vitrification Program was the cornerstone of the entire clinical journey for this couple.

Contact us on info@indonipponivf.com if you feel you or any of your friends or relatives can benefit from our advice! We would be most happy to help!

Request A Call Back